Riverfest is a spectacular outdoor music festival featuring a blend of nationally renowned entertainers along with popular regional bands. Dating back to 1985, this free event held at beautiful Riverside Park has become a summer tradition for residents as well as music enthusiasts from near and far.

Over the years, Riverfest has played host to such acts as Night Ranger, The Kentucky Head Hunters, Molly Hatchet and Nitty Gritty Dirt Band.  Each year, special attention is paid to bringing in a unique mix of musical genres such as rock, country, jazz and traditional sounds.

Riverfest has grown to include not only music, but events for just about everyone. The festival features:

Don’t miss out on all Riverfest has to offer. If you would like to learn more, visit the Riverfest Website. 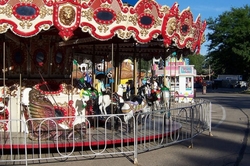